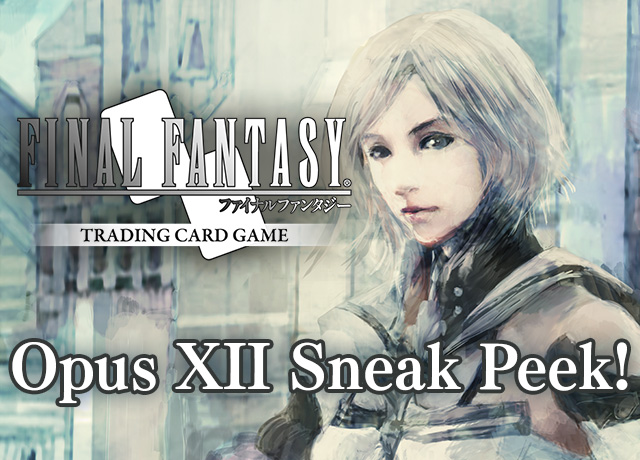 FINAL FANTASY TRADING CARD GAME, abbreviated FFTCG, is played all around the world.
We’re excited to bring you an FF Portal-exclusive sneak peek of two cards from the newest FFTCG set, Opus XII Crystal Awakening, which will be released on November 6th!


Hello, everyone. Taro Kageyama here, producer for FFTCG. The newest set, Opus XII Crystal Awakening, was originally set for release in July but sadly delayed due to COVID-19. However, a release date of November 6th has officially been decided, and I’m happy to be back here on FF Portal to introduce new cards from the set. This time I’ll be talking about two cards, and I hope this will get you excited for Opus XII’s upcoming release!

The first card I’ll be discussing is Esha’ntarl, a character from FINAL FANTASY XI. Esha’ntarl is an important character in FFXI’s Chains of Promathia expansion, and this illustration of her is actually Yusuke Naora’s first time contributing art for FFTCG! Mr. Naora is a well-known artist amongst fans, having worked on many FINAL FANTASY titles. This marks the first appearance in FFTCG of not only Mr. Naora’s illustrative talents, but also the character Esha’ntarl, so this is a must-see card! First, let’s take a look at its gorgeous design.

Now that we’ve had the chance to admire the card itself, let’s move on to how it can be utilized in play. Esha’ntarl has only one ability: by returning her card to your hand, you can play 1 Forward other than Card Name Esha’ntarl of cost 7 or less from your hand onto the field.
Yes, I said a cost of 7 or less! It wouldn’t be an exaggeration to say that allows placing almost any Forward onto the field, including cards that could be central to your deck’s strategy. Sticking to Esha’ntarl’s Ice element, you can play such top-tier characters as Sephiroth [7-034L], Vayne [9-022L], Locke [4-048L], and Setzer [4-036H]. And this ability doesn’t have any restrictions on which element of Forward can be played from your hand. There are of course play many powerful Light and Dark element Forwards you could play, and the new Multi-Element cards that are introduced in Opus XII Crystal Awakening are also a totally viable option. Playing a card which has an ability that activates upon it entering the field would be another great strategy. One more good aspect of Esha’ntarl is that she returns to your hand, allowing her card to be used over and over again. I hope you’ll try out many setups and find the perfect cards to play to the field using Esha’ntarl’s ability.

Our next card is a character from FINAL FANTASY XII, Ashe, princess of Dalmasca, illustrated by Isamu Kamikokuryo. This is Mr. Kamikokuryo’s third time illustrating for FFTCG, following Gabranth [9-063L] and Penelo [10-058R], and this time his art is also featured on the packages for Opus XII Crystal Awakening. Starting November 6th, you’ll be able to see his illustration on boxes and booster packs in stores. We’re really excited about the design this time and we hope that FINAL FANTASY fans who have yet to play FFTCG will enjoy the new art as well.

Now, let’s look at how this card can be used. Ashe is privy to two abilities, both of which are a little unusual. The first gives Ashe +2000 power and prevents her card from being chosen by your opponent’s abilities when you control 6 or more characters. Controlling Ashe and 5 other characters fulfills the ability’s requirements, but the Wind element makes it easy to get lots of characters out on the field so I don’t think the requirements for this ability are particularly high.
Ashe’s other ability allows you to draw one card at the end of each of your turns, provided you’ve cast 3 or more cards during that turn. “Cast” means you pay the cost displayed in the upper left of a card in order to play it from your hand. Backups grant resources, allowing you to cast more cards. Wind cards typically excel at Activating Backups to grant even more resources, so I don’t think this ability is all that difficult to carry out either.

And that’s another sneak peek of two new cards! Of course, you can enjoy FFTCG as a game, but each set brings new illustrations like we’ve introduced here, so it’s fun from a collector’s standpoint as well.

FFTCG is a one-on-one tactical card game featuring FINAL FANTASY characters and summons. Not only is there fun in collecting cards featuring familiar faces, the main draw of the game is the simplicity of the rules combined with the complexity of the gameplay. The art drawn for the game by famed illustrators is also a popular aspect of FFTCG!