Ateam Entertainment Inc. and SQUARE ENIX CO., LTD. are proud to announce that a collaboration event with popular rock band MAN WITH A MISSION is beginning in FINAL FANTASY VII THE FIRST SOLDIER starting May 20, 2022.

MAN WITH A MISSION Collaboration Event Under Way!

The Ultimate Life Forms of MWAM appear on the training field to further Project 0’s training program! The five members of the iconic band will appear as boss monsters, and “The Soldiers From The Start”, written specially for the game, will play as battle music! This collaboration music can also be enjoyed from the home screen.

*Battles can be started only until 0:59 UTC.

The first time you log in during the event, you will receive the “FLY AGAIN Yeah, Yeah, Oh (MWAM)” emote, which recreates the movements featured in performances of MWAM song FLY AGAIN. 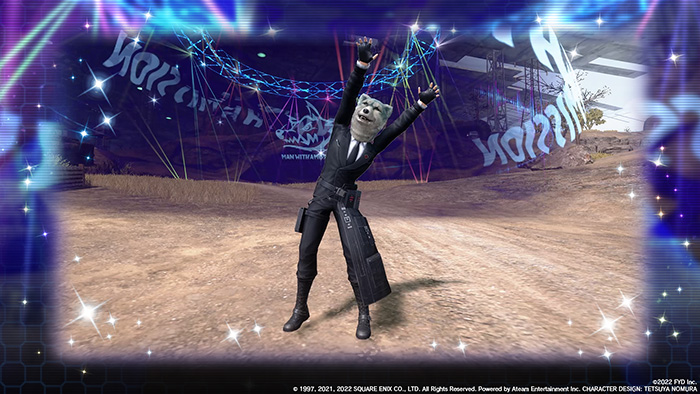 How to Play the Event

Head to the Glitch Fields and take on the Ultimate Life Forms!

Special concert-like fields will appear in matches during the event. Find them from the mini-map, and head to the field to take on the bosses. Beware, as the battle awaiting at the red mark is said to be particularly difficult.

Three bosses will appear at each glitch field and attacks differ between the different band members.

Be sure to play with the sound on to enjoy “The Soldiers From The Start”, written specially for this collab event while you fight against the Ultimate Life Forms.

*MWAM’s new album “Break and Cross the Walls II” releases on 5/25/2022 and features collab song “The Soldiers From The Start”.

Become One of the Band with MWAM Items Available in the Limited Prize Pool!

Get a Special Banner and More in MWAM Collab Login Bonuses!

Log in during the event for special rewards including a collab-exclusive MWAM banner, chocobo feed, and more.

About MAN WITH A MISSION

MAN WITH A MISSION is a rock band made up of five Ultimate Life Forms, each with the head of a wolf and the body of a man. Tokyo Tanaka performs vocals, Jean-Ken Johnny is on guitar and vocals, Kamikaze Boy plays the bass, DJ Santa Monica serves as DJ, and Spear Rib plays drums. Appearing in many televised commercials and performing the main themes for numerous anime, television series, and films, they boast a huge fandom spread across the world. They have joined big names such as Zebrahead and Jimmy Eat World on international tours and are still a major driving force in the rock scene more than 10 years after their debut in 2010. They released their sixth studio album "Break and Cross the Walls I" in November of 2021 and its follow-up, "Break and Cross the Walls II", is planned for release on May 25th, 2022.


FINAL FANTASY VII THE FIRST SOLDIER is now available as a free download with in-app purchases through the AppStore and Google Play.

About FINAL FANTASY VII THE FIRST SOLDIER
In FINAL FANTASY VII THE FIRST SOLDIER players will embark on an intense battle royale experience where they must fight to be the last SOLDIER standing. To do so, players will use magic and special abilities along with ranged and melee weapons to triumph on the battlefield. Players can choose between various styles, such as Warrior, Sorcerer, Ranger, Ninja or Monk, each of whom boast unique special abilities. In addition to other SOLDIER candidates, players must also contend with ferocious monsters who inhabit the outskirts of the city. By defeating them, players can gain experience needed to level up and unlock new weapons. Classic FINAL FANTASY elements abound in the game, such as rideable chocobos, powerful espers, including Ifrit, to summon and materia, which enables players to cast devastating spells. Players can customize their characters’ outfits and accessories, obtain various weapon and vehicle skins, emotes and more to create their own unique SOLDIER.

BACK TO NEWS
BACK TO TOP BACK TO
TOP